Watch Prunella Scales and Timothy West’s journey through the Caledonian Canal this Sunday on Ch4 8:00pm-9:00pm 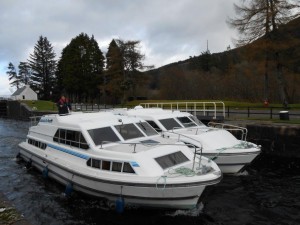 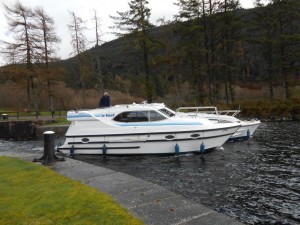 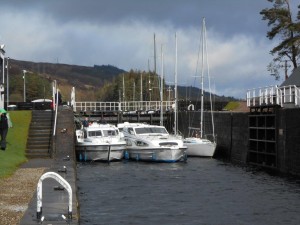 It was all hands on deck yesterday as we started moving our boats from their winter moorings on the Canal back down to our operating pontoons on Loch Lochy. 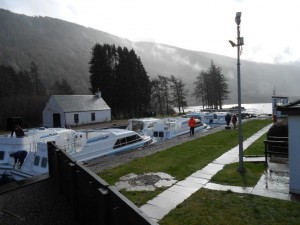 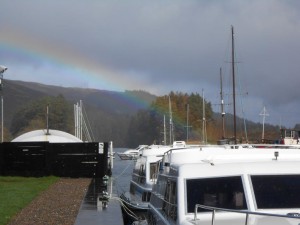 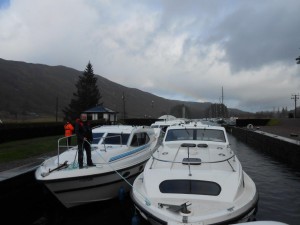 It was a good day to move them through, better than doing it doing it today as it is blowing a hoolie! 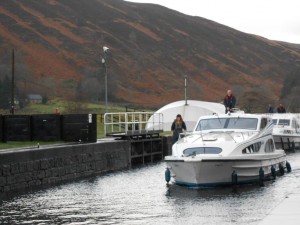 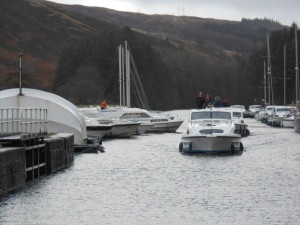 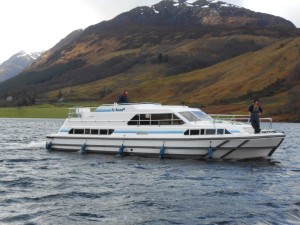 A couple of fishing trawlers came through yesterday while the locks were open. 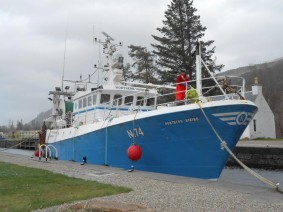 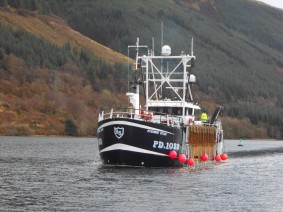 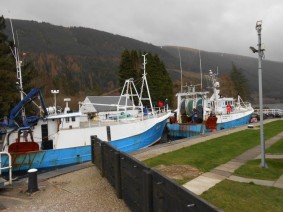 The Canal is open at the moment by arrangement, the spring hours start on Monday 24th March – they will be open from 8.30am to 5.30pm.

So far today we have seen a private yacht called Endeavour, (the crew were heading for Gibraltar where they are meeting up with some other crew members, the journey is to commemorate the 2nd world war and has been organised by ex Marines) and there have also been a couple of large Trawlers from Scandanavia.

Spring is in the air at Laggan today, the birds are in full song, the spring bulbs are pushing through.

The loch is still with barely a ripple. The rest of the boats will soon be taken through the canal back to the loch.

It was a lovely spring day yesterday, with a wee chill in the air, but today the mercury has barely risen above zero.

Birds are starting to mate, the Woodpecker has been busy drilling away these last few days.

The loch is like a millpond with the odd ripple when the ducks come by.

Walking paths and tourist routes across Scotland’s forestry estate, including the West Highland Way, are to be improved as a result of a £3.15 million funding boost for  Forestry Commission Scotland.  A total of £1 million will be spent on the Great Glen Way to build over 11 miles of new path and upgrade surfaces on this popular tourist route which runs from Fort William to Inverness.

The route  spans 79 miles/127km between Fort William and Inverness, and the whole route can be walked in five or six  days.  The Great Glen Way suits all levels of walker. For the less experienced it is the perfect introduction to long distance walking, being for the most part low-level and following mainly towpaths and woodland tracks. There are some challenging sections though, and the more experienced may wish to tackle a few Munros or Corbetts within reach from the route.

Most parts of the Way are easily accessible from the many pontoons and moorings along the canal, offering an opportunity for the more energetic to combine walking and boating in one holiday.

The lock keeper came to Laggan today to let the Jacobite Queen through the locks.

It was a good opportunity to move our last 2 boats to safe haven for the winter.

It has been a cold week at Laggan, the mercury has barely risen above freezing.

There was a hive of activity here on Wednesday, some of the larger boats were lifted out of the water, for winter maintenance.  Is was a good day for the craning as it was dry and still.

The rest of the fleet have been taken through to the canal as they will not be so exposed to the elements.  Loch Lochy can get quite wild through the winter and the boats would take a battering down on the pontoon.

The canal has started to freeze over, it is unusual for the freeze to start so early in the winter.

Bona Lighthouse can be seen  at the NE end of Loch Ness, on the Northern shore where the canal leaves Loch Ness on its way to Loch Dochfour. The light opened for business in 1822 and was  for a while the UK’s smallest manned inland lighthouse.

The Vivat trust are planning to restore the building, which has fallen into disrepair, beginning in Spring next year.  The striking octagonal building, by the world-renowned engineer Thomas Telford, has been overnight stables for horses pulling vessels along the waterway, as well as one of only a few inland lighthouses across the UK.  The building will be sympathetically repaired and refurbished, giving it a new lease of life as two short-term holiday rental properties.

The Caledonian Canal will be closed to through traffic for a period this winter to allow essential repairs to be carried out by Scotland Transerv, on behalf of Transport Scotland, on the road swing bridges at Banavie, Aberchalder and Fort Augustus. Other works, during the same closure period, may be confirmed later in the year.

The canal will be closed to through traffic from 4pm on Friday 4 January 2013 until 4pm on Sunday 17 March 2013 inclusive.

The canal will repoen for through passage from 9am on Monday 18 March 2013.

During this closure period, navigation of some sections of canal will be possible within  normal operating hours of Monday to Friday, 9am to 4pm, and by prior arrangement with the Canal Office.

Important: Vessels wishing to transit from sea to sea after the New Year break (from 9am Thursday 3 January 2013) and before the planned closure MUST enter the canal sea locks by midday on 3 January to be sure of transit before the closure.

Please call the Caledonian Canal Office on 01463 725500 for advice and bookings.